History of the Arlington Fire District

The Arlington Fire District began in the roots of a volunteer company called Arlington Engine Company #1, which had evolved out of the American Chemical Protection Company in the early 1920s. The Arlington Fire District was created by Town of Poughkeepsie town law and over several years other Fire Companies within the town joined the District, namely the Red Oaks Fire Company, the Rochdale Engine Company and finally the Croft Corners Fire Company. The fire service of the time was a community-based organization that regularly turned out 60-80 people for any event, be it a fire, a dinner or a community dance.

Members included firefighters and a Ladies Auxiliary that supported the operations of the fire companies by providing refreshments at large events.

In the 1950s, hospitals could no longer provide ambulance coverage to the community and so the District began its own local ambulance service. EMS providers had to know basic First Aid and Cardiopulmonary Resuscitation (CPR) and then were later required to become New York State certified Emergency Medical Technicians.

In the late 1980’s, discussions began regarding the need to use Advanced Life Support (ALS) ambulances and a committee was formed within the District and ultimately the decision was made to go “ALS”. On July 2, 1990, the Arlington Fire District began providing ALS level prehospital care with just four (4) original paramedics. 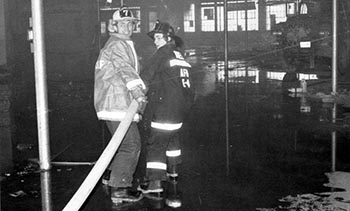 In 1990, the Arlington Fire District began providing ALS level prehospital care and over the following ten years added another twenty-four members to the career roles. The District has hired thirty-five additional career staff since the year 2000 to handle the increasing volume of EMS and fire calls.

Effective January 1, 2017, the District contracted with Mobile Life Support Services, Inc., a NYS Certified paramedic level commercial ambulance service provider, to manage the transportation of patients to our local hospitals. This change, enacted by the Board of Fire Commissioners, enables the District to expand its career firefighting and paramedic coverage to its four stations 24 hours a day / 7 days a week, thus more efficiently and effectively serving the entire population.

A five member Board of Fire Commissioners, elected by the residents of the Fire District and each serving a five year term, governs the District.

Currently, management consists of a career Fire Chief, a volunteer 1st Assistant Chief and one career Director of Emergency Medical Services. Administrative staff consists of a District Secretary, an Account Clerk, a Bookkeeper and an EMS secretary position.

Members of the District provide fire and EMS services as a municipal organization within the Town of Poughkeepsie, but not under the Town's jurisdiction, except in abiding by Town law.

A Brief Photo History of The Arlington Fire District